On Sunday 25th March, 12 mini red (8u) Norfolk players travelled to Gosling Sports Centre to play in the East Region county cup. The morning was the girls turn, the team made up of Lily Youngs, Freya Braybrooke, Olivia Marjoram, Katie Webster, Esme Atherton-Howlett, and Sophia Butwright. The girls’ first match was against Bedfordshire, the slightly nervous girls got off to a fantastic start winning the match 5-1. Next up was Buckinghamshire, after their first win the girls had a little spring in their step which they carried on to the tennis court gaining another win 5-1. They then played Berkshire, the girls now very excited as all of the team have had an individual win if not two. The team had a fantastic result winning 6-0. The last group stage match was against Hertfordshire who had also won all of their matches. After the first two matches it was 1-1, with Esme gaining a tight win. Katie also then managed to get a very close win 10-9, which meant we were 2-1 up. We lost at number 3 to make it 2-2. Freya had a super close match narrowly losing 10-9, which could have gone either way. Hertfordshire won the rubber 4-2 in the end; we were really pleased with how hard they worked.
The girls finished second in their box, which out them through to play a semi final against the winners if the other box, which was Essex. The other semi final was Hertfordshire and Cambridgeshire. Essex were just too strong for Norfolk with a little more pace and experience they won 6-0. So it was 3rd/4th play off for the girls’ team against Cambridgeshire, they had some very close matches but no one managed to convert them to wins. They lost the match 6-0 so finished a very respectable 4th place out of 10. The girls showed real team spirit throughout the morning and supported each other all of the time.
The afternoon was time for the boys to have a go, the team made up of Nathan Collins, Joseph Daisley-Cramp, Teddy Curtis, George Munby, Stanley Dyke, and James Ashton. The boys’ first match was against Essex, which proved too tough for them and they lost 6-0. Next up was Oxfordshire; we went 2-0 down after the first round with James narrowly losing 10-8 and Stanley also having a close loss 10-7. However George had a straight forward match winning 10-2 as did Teddy winning 10-3. After 4 matches the score was 2-2. Joseph had a tough match losing 10-4, Nathan was last on playing a must win match to keep us in the match. He managed to get the win 10-6 to make the match score 3-3. Norfolk got the win as they had won more points! A great effort from the boys. Then they played a very strong Cambridge team, they worked very hard but struggled to convert and of the close matches and lost 6-0. Lastly in the group was Northamptonshire, again there were some close matches with James losing 10-9, and Teddy 10-7. Joseph played some fantastic tennis and managed to convert his match to win 10-6. However Norfolk lost 5-1.
Norfolk finished 4th in their box so went through to play for 5th/6th/7th or 8th place. They had to play Buckinghamshire, this tie was really close with George, Teddy and Nathan all winning the score was 3-3 after the 6 matches were played. However this time Buckinghamshire had won the most points so unfortunately the boys narrowly missed out by only 6 points and had to play for 7th/8th instead of 5th/6th. They had a rematch against Northamptonshire which proved too tough for the boys last match and Norfolk boys lost 6-0, so therefore finishing 8th in the competition. All boys worked hard and supported each other as a team. We were proud of their attitude and pleased they kept trying hard.
Hertfordshire won both the boys and the girls events so were the overall winners. 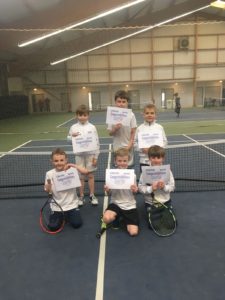 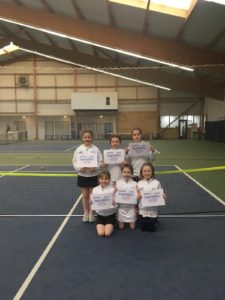