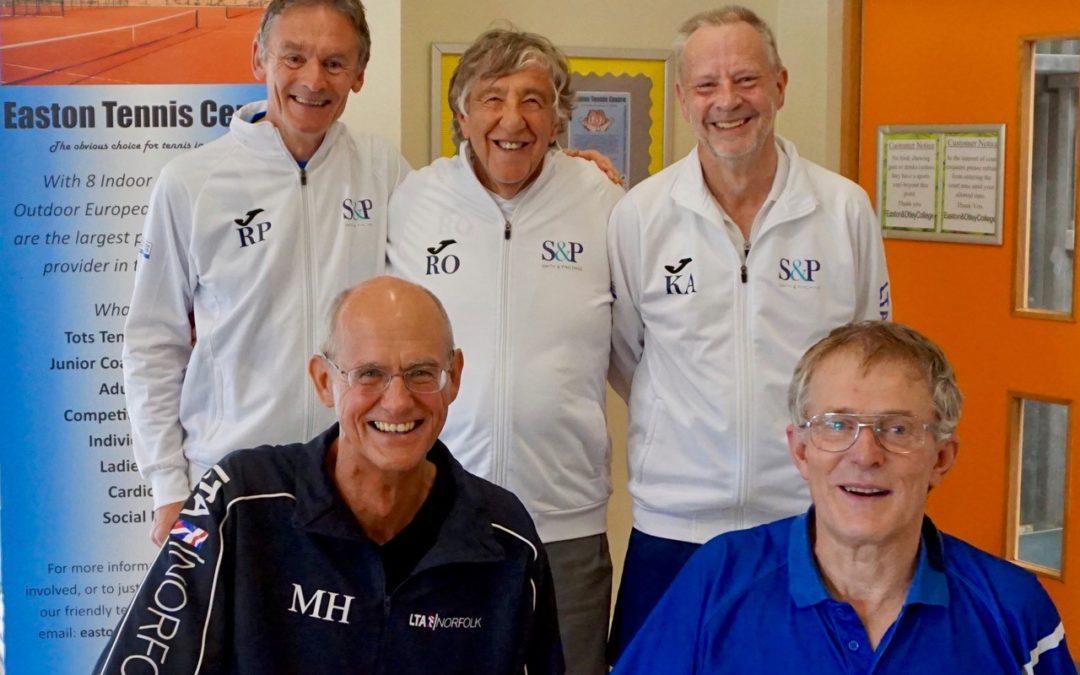 NORFOLK MENS OVER 65 REPORT – YEAR OF THE MATCH TIE-BREAK

With due deference to the advancing years of the participants, County matches played between “seniors” have a match tie-break if any rubber should reach one set all.  This proved to be an inspired rule for Norfolk men of a certain age in 2019.

In 2018 the Norfolk Mens Over 65 team finished third in Div 2, so would not have expected promotion.  Somehow the gnomes of Roehampton decided they should be promoted anyway, so for 2019 new skipper Rob Ollman found himself in charge of a Division 1b team with matches against Kent, Staffordshire, Cheshire, Berkshire and Middlesex.

Things did not start well with a 5-0 home loss to a very strong Kent side, who fielded the national No1 man at Over 65.  Mike Hutson secured the only set won by Norfolk in the match.  With Mike away for the next match, away v Staffordshire, Philip Tye was drafted in, playing down from the Over 70’s for his one match.  Unfortunately, facing a very strong Staffordshire team, the result was similar – a 5-0 loss.

Undeterred, the team travelled to Cheshire, the 2018 champions, during the heatwave of County week.   Playing indoors in 30+ degrees heat and on the alien surface of carpet seemed to suit the Norfolk men and a 5-0 win was secured thanks to four of the five rubbers being won on match tiebreaks.   Next up was a home match v Berkshire.  This was always likely to be a tight affair, and Norfolk squeaked through thanks to two singles wins from Ollman and Hutson and a doubles win from stalwart pairing Arnold & Henderson (aka the brick wall).  And yes, all three rubbers won were on match tiebreaks.

With two wins under their belts and a Div 1 place for 2020 all but secured the team headed to Queens club in London for their final match v Middlesex, to be played on clay the week after all members of the team had played Cromer Senior on grass.  Not at all perturbed by this Mike Hutson won his singles in two very tight sets, and then the fun started.  Arnold and Henderson edged their first doubles on a match tiebreak, after saving two match points at 7-9 down.  So Norfolk required one of the final two doubles rubbers to take the match.  Unfortunately the “brick wall” crumbled a bit leaving the outcome on Hutson and Palmer in their doubles.  Of course this match went to a match tiebreak.  Just to make things even more interesting they went 4 match points down at 5-9, but thanks to some positive play and perhaps some nerves from their opponents they won the next 6 points to take the rubber and the match. 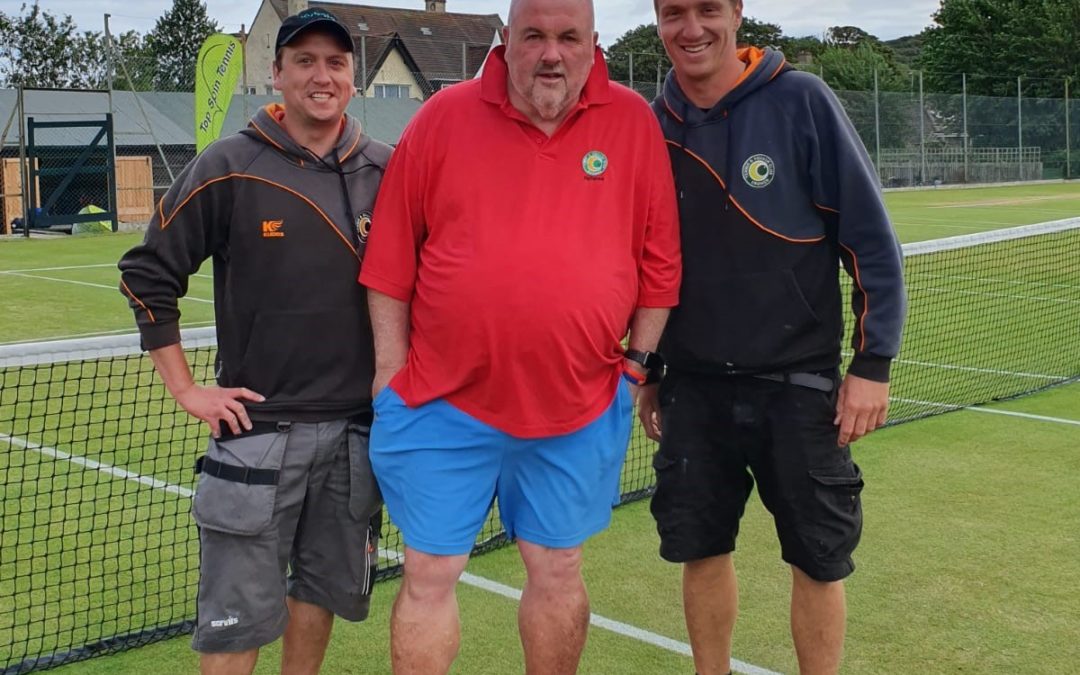 Congratulations to the “Dream Team” for a fantastic Tournament.

Big Thanks to Jordy and Peter for the Fantastic Grass Courts  – Top 5 in the Country again for 2019 !

The Centenary year brought with it some outstanding tennis from our Norfolk players:

WELL DONE ! to everyone involved 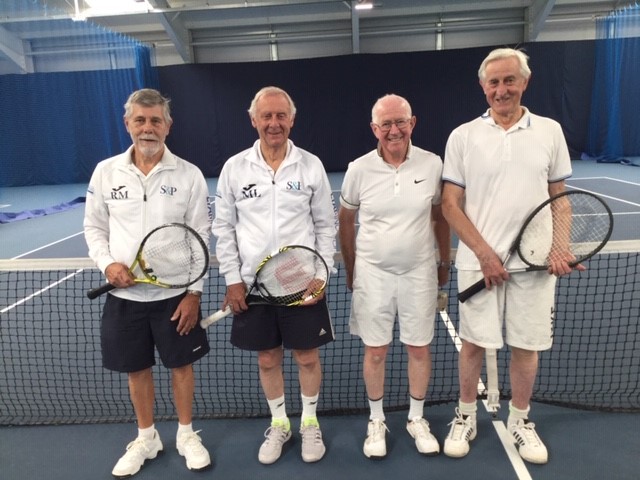 Team Report:-
In contrast to last season, we had Roger Meadows and Jim Wiseman join us from the over 70’s . So with Mike Lake and myself we had a solid team. We had some useful practice sessions , and all remained injury free. Unfortunately after relegation we found ourselves in the bottom group – 2 B , with only 3 counties to play. Our first fixture against Suffolk at Easton in June was a close hard-fought match with 2 Championship Tie-breaks. Meadows and Edelsten managed to rescue theirs from the jaws  of defeat. From 4-9 down they hit on an attack of self- belief to win 11-9 !!
Lake and Wiseman also won a Championship Tie-break against the same pair, and defeated their 2nd pair 6-4, 7-5 to clinch a victory by 4 rubbers to 0.
In July we traveled to Luton to play Beds indoors on a fast surface with almost continuous noise of aircraft taking off right overhead. We won a rather one=sided match , losing only 12 games in total ,so again 4 rubbers to 0. Their Beefeater hospitality was excellent .
Our final match in August was at home versus Dorset . Fortuitously they had postponed the original fixture date on the hottest day of the year (30+ degrees) , as one player’s smart wrist watch had his resting heart rate at 125 and his blood pressure raised. As with Beds , we had an enjoyable match with some good tennis , but we were better and more mobile , winning again by 4 rubbers to 0 . The second pairs had a good match 6-3,7-5 to Lake and Wiseman. We treated them to a leisurely meal at the Premier Inn , as they only had to get to Ipswich for their Suffolk match the next day.
We are therefore top of the Division, and hope for promotion to Division 1 and some more challenging opponents. 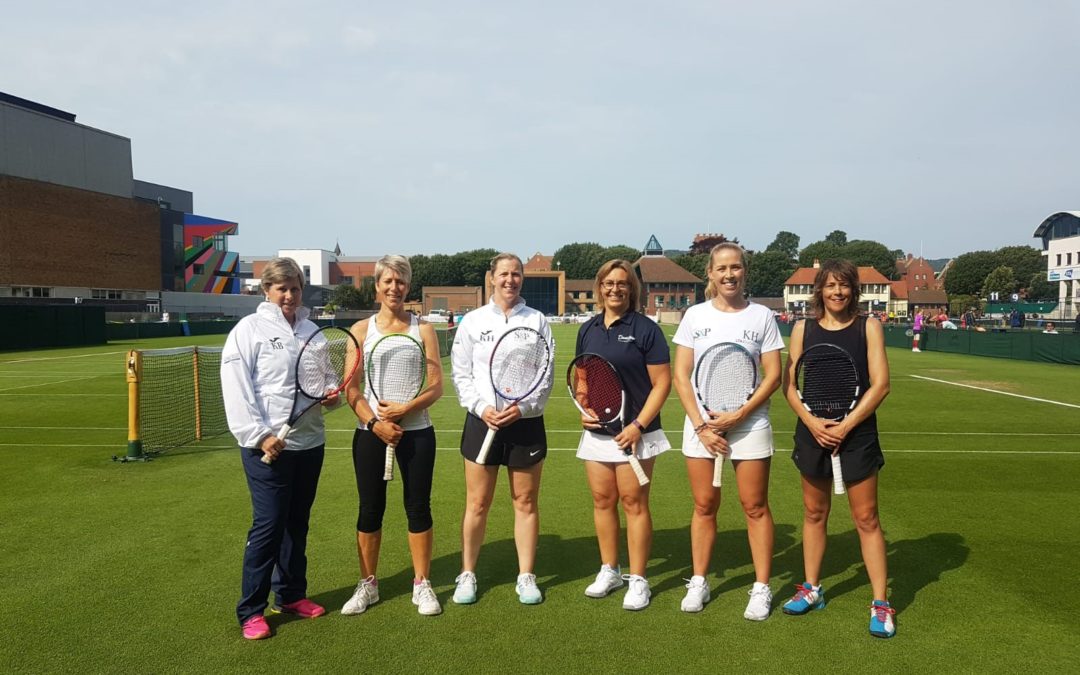 This year the event went back to its original format which means we took 2 extra players than the previous years. This was the 1st time playing in the 35’s team for Andi and the 1st time in about 17yrs for Kerri representing the county.

Jeannette and Karen played the singles finishing 1-1 before the 1st doubles pair went on. For round 1 Annika and Katie played together managing to come from a set down to win in a match tie break. This meant after the 1st round we were 2-1 up. For round 2 the doubles pairs were Katie and Andi, Karen and Kerri. It all came down to a match tiebreak which unfortunately we were unable to win, eventually losing 3-2 overall.

After going 2-0 down in the singles it was up to Annika and Jeannette to keep us in the match. Once again it came to a match tiebreak which they won 10-6.

We needed to win both doubles in round 2 to win, Kerri and Karen won their match to level the tie but the opposing teams pair were too strong in the last match. 3-2 loss.

Both teams were playing to stay in division 4. Jeannette went on 1st for her singles and had a great match eventually winning 10-6 in the match tiebreak. Karen then won her singles to take us to 2-0 up only 1 more match needed for the win! Kerri and Annika almost had it in the doubles going down 7-10 in the match tiebreak. It then all fell to Karen and Andi to win the final rubber of the day. After winning the 1st set they found themselves 6-2 down in the 2nd set tiebreak but made a comeback to take it 10-8!

A great weekend of tennis with a great team and supporters who came to enjoy the tennis/ Eastbourne sun! Thank you for the team for all their hard work and support, well played!!