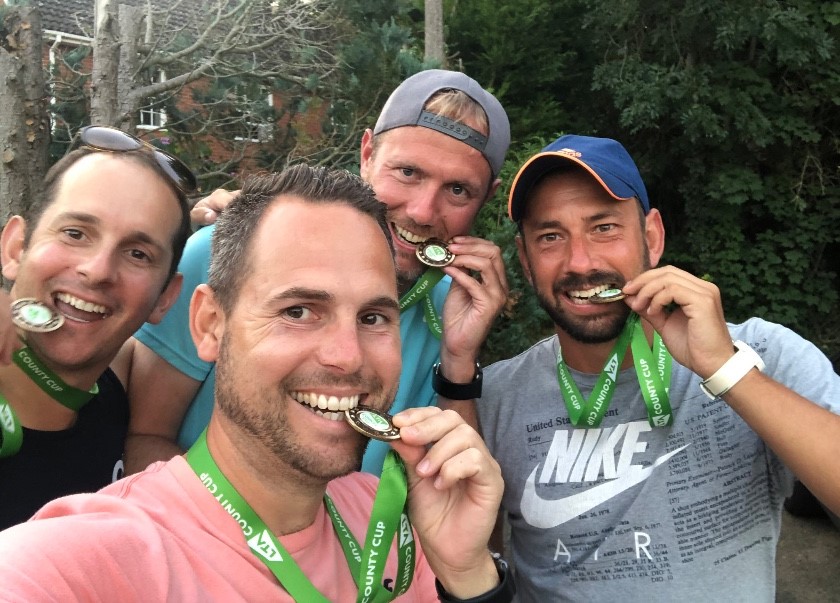 Norfolk’s O35 Men clinched promotion from Division 6B at Devonshire Park in Eastbourne over the August bank holiday weekend.

Comfortable wins over Northamptonshire and Avon left the team needing just a single rubber on the final day against the Channel Islands, which they duly claimed to top the group and seal promotion.

The campaign started with a 4-1 win over Northamptonshire; Nick Stocker’s narrow singles defeat put Norfolk behind until Barry Fulcher won in straight sets to level the scores.

A fine start, with every squad member on the board.

Day two’s opponents Avon had a win over the Channel Islands under their belts, but Norfolk were in the groove early and went 2-0 ahead with comfortable singles performances from Crawley and Fulcher.

The result was in the bag when Wynne and Nick Stocker won a doubles in straight sets, but Norfolk were feeling ruthless and Fulcher and Chris Stocker made it four with a hard-fought victory.

The 5-0 whitewash was completed by Wynne and Nick Stocker, leaving Norfolk on the brink of promotion and needing just one rubber on the final day to claim top spot.

On Sunday, it was the captain who stepped on court first against the Channel Islands hoping to finish the job for his team, but the fairytale ending was not to be as the previously undefeated Wynne produced a woeful performance to give Norfolk’s opponents a glimmer of hope.

Next to try and get the party started was Crawley, so often the hero for his county over the last 20 years.

Unlike his team mate, the man from Caister rose to the occasion and produced another commanding singles performance to win in straight sets and confirm Norfolk as group champions.

Even an ill-tempered outing for the Stocker brothers did little to dampen the weekend’s success as Norfolk collected their medals in the brilliant Sussex sunshine.

Dan Wynne was pleased that his all-star squad delivered :

“We came here with big expectations; we have two former international players in Crawley and Fulcher, and a young squad with nearly 350 caps for Norfolk’s first team between us. Anything less than promotion would have been hugely disappointing.

“That said, we faced good opposition who made it a great weekend of competition, so we are pleased to have achieved our objective.”