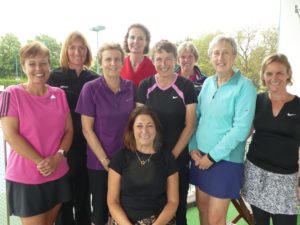 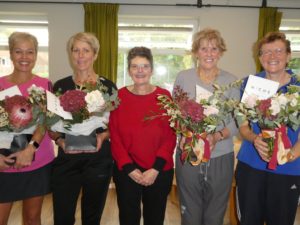 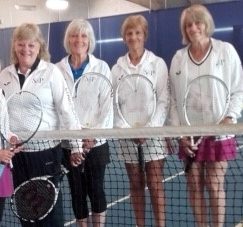 The 65s had a very successful year. We had a strong team and won all our five matches 4-0 or 3-1 which means we shall be promoted to Division 1 next year. We are very lucky to have a competitive and committed squad of Sally Farman, Angela Roy, Jane Ling, Mary Ogden and Linda Green. Well done team!  We shall look forward to stiffer competition next year and a return to playing singles as well as doubles. 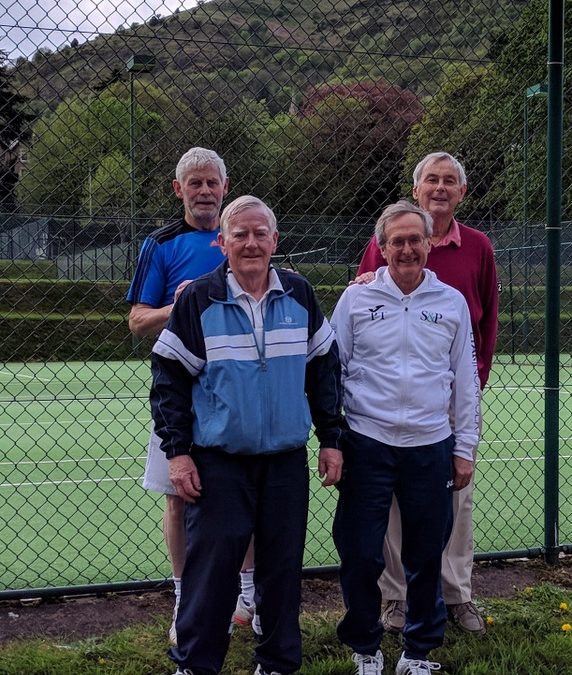 The 70’s lost 2 players to the 75’s team this year but compensated by gaining Philip Tye from the 65’s team and Mike Musson returning after 2 years with a serious knee injury. So with David Hunt, Charles Armstrong and captain Mike Huggins, this squad played all the matches in Intercounty Division 2, but narrowly missed out on promotion to Div 1 by only finishing 3rd in their division.
An early season trip to Malvern to play Hereford & Worcester in April was rewarded by convincing wins for Huggins & Tye and hard fought games for Hunt & Armstrong to give Norfolk a 3-1 win.
A busy July started well with a trip to High Wycombe to play Bucks. With Musson playing in place of Armstrong, his magic resulted in a convincing ?? win by 40 games to 38 after rubbers and sets were tied.
A long trip to Poole to play Dorset in temperatures above 30 C was next – all players disappointed at missing vital points or games which should have made a 4-0 defeat very much closer. The food was good though and some people made a few days holiday of it !!
At last Norfolk were at home but Essex –by far the best team in the division – came out 3-1 winners but credit to Musson playing with Tye this time for their victory.
The team completed their matches at home with a resounding 4-0 and 48 -18 game score against Devon.
Mike Huggins

The Norfolk Ladies O60’s team have had a successful campaign in this years Seniors Inter-County Championship.

They were drawn in Division 1A home against Lancashire, Cheshire and Lincolnshire with the matches being played at the David Lloyd Norwich Club. Their away matches were against Hereford and Worcester, and Dorset and so they travelled to Malvern and to Bournemouth respectively to compete.

A strong squad was fielded with singles players Tish Peal(captain) and Caroline Blincoe who then teamed up to play doubles. Then the doubles pair in the team was made up of Sue Rich accompanied by either Audrone Strasauskiene or Jane Ray. Jenny Coady was on standby as reserve for all matches.

Over the 5 matches,  which meant 25 rubbers played altogether, only 2 rubbers were lost by Norfolk in total, which is an amazing achievement. As a result the Norfolk Ladies now have to play Essex in the final play off. This will take place on Saturday 30th November at the David Lloyd Club in Dudley.

The 60’s have had a good year with a keen and dedicated team who have made the matches fun and enjoyable, and I thank them hugely for their commitment. Thank you also to David Lloyd Norwich for making courts available for our home matches.

The team look forward to playing in the final in a couple of months, fingers crossed for a good match.

The Norfolk Ladies Over 40’s team had a very challenging season in Division 2.

We started the season playing East of Scotland at home on the indoor courts at David Lloyd.
Jeannette and Andi won their singles matches.
Katie and Suzie won both their doubles matches.
It was a great team performance.
Norfolk won 4-1.

We travelled to Cambridgeshire and we encountered a very strong experienced team.
Jeannette had an excellent singles victory .
Norfolk lost 1-4.

We then played Bedfordshire away on a very hot day on their indoor courts and outside on an astro turf court!
They certainly had ‘home’ advantage!
Norfolk won 2 out of the 3 doubles matches and Jeannette just lost her singles on a Championship Tiebreak.
It was an excellent team performance.
Norfolk lost 2-3.

We played Buckinghamshire at home on the blue courts at East Anglia Tennis and Squash Club.
It proved to be a first class venue with excellent courts and a brilliant afternoon tea – amazing sandwiches and Victoria Sponge Cake!
Jeannette had a brilliant singles victory, winning on a Championship Tiebreak.
Katie and Suzie had an outstanding doubles win.
Norfolk just lost 2-3.

We finished the season playing against a very strong Lincolnshire team at home.
Jeannette and Annika recorded our only victory of the day with a good doubles win.
Norfolk lost 1-4.

We finished 5th in our group, but several of our matches were very close.
There were some excellent singles and doubles victories throughout the season.

I would like to thank all of the team for their outstanding effort, commitment and enthusiasm this season.

We have already started preparing for next Summer, with regular weekly team practices throughout this Winter and next Spring.
I am very much hoping the team will be sponsored in 2020 by Dunlop and we will be wearing Dunlop sweatshirts and team kit for our matches next Summer.

We are already looking forward to our matches next Summer!!!